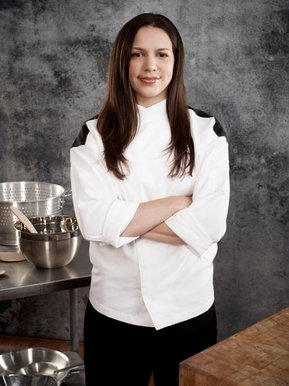 Originally from Phillipsburg, NJ, Chef Christina Wilson moved to Philadelphia to pursue a degree in education. At the time Chef Wilson had her sights on heading a classroom and worked in restaurants to pay her way through Temple University.  This would later prove to be her true passion.

In 2005, Chef Wilson turned her enthusiasm in the kitchen towards an unpaid apprentice position at Gypsy Saloon, located in West Conshohocken.  Excelling quickly, she moved her way up the ranks and became kitchen manager of both Gypsy and her sister restaurant, Stella Blu, in under a year.

Natural talent and self guided passion helped Christina climb to sous chef within two years of her first kitchen shift. Having learned all that was available to her at Gypsy and Stella Blu, Wilson moved to Center City, Philadelphia to tackle her next position as sous chef at 13th Street’s, modern Mexican byob restaurant, Lolita.

Christina quickly became accustomed to the standard and pace of this well respected restaurant.  She took both creative and managerial command of the kitchen and within her first year was offered the position of Chef de Cuisine . While leading the kitchen, the restaurant received a nod from Travel  & Leisure Magazine, naming Lolita one of the top 14 byob restaurants in America (2009).
Yearning for more knowledge and varied experience, Chef Wilson later moved to Top 50 Philadelphia restaurant, Mercato, as Chef de Cuisine. Christina created trendsetting and unique daily specials for the Italian eatery in addition to launching its lunch service.

June 4, 2012, marked the debut of Chef Wilson’s next big step as she joined 17 cast mates from around the country competing to win Season 10 of Hell's Kitchen on FOX. Through dedication, hard work and unwavering control, Chef Wilson rose above the rest and won the head chef position at Gordon Ramsay Steak located in The Paris Las Vegas.

While at GR Steak, Christina had the pleasure of assisting the design of the Hell’s Kitchen Limited Addition Tasting Menu, and with the entire GR team successfully served over 400 guests each night of service. During Chef Wilson's time at GR Steak, both  EATER and  THRILLIST  named Gordon Ramsay Steak as number 1 of The Top 8 SteakHouses in Las Vegas.

After an extremely productive and exciting experience at Gordon Ramsay Steak, Christina is currently taking on her newest challenge as the Executive Chef of Gordon Ramsay BurGR in Planet Hollywood Casino.
Powered by