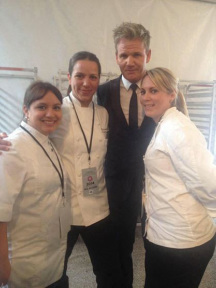 The Elton John AIDS Foundation (EJAF) presented it's 22nd annual Academy Awards Viewing Party  at West Hollywood Park in Los Angeles; hosted by Sir Elton John and David Furnish.  Along side Chef Ramsay and Chef Andi Van Willigan, Chef Wilson helped facilitate the magnificent dinner for party guests to enjoy while watching a live telecast of the 86th Academy Awards. Over the past 22 years, this annual event has raised nearly $40 million, that is put towards a wide range of initiatives, including direct treatment, care, and support services for people living with HIV/AIDS. Christina was honored to be a part of such a relevant and historic event.

Bacchanal Buffet at Caesars Palace celebrated its first birthday by giving to others. Bacchanal hosted a five-course dinner with wine pairings in the private dining room to benefit the food bank 'Three Square'. In it's young age Bacchanal has become one of the favorites for buffets in Las Vegas. Chef Wilson was honored to sit back and enjoy this celebration with the Caesars family. Indulging in delicacies like sweet corn soup with Maine lobster croquette and hazelnut oil; a pan-roasted diver scallop with a saffron potato mousseline and heirloom tomato; pan-seared petite Black Angus filet mignon with chanterelle mushrooms and celery root puree, root vegetable confit and natural demi glaze; and, to finish it all off, a board of decadent cheeses and fruit. 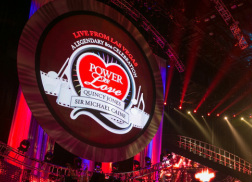 The 17th annual Keep Memory Alive Power of Love Gala wowed guests at the MGM Grand Garden Arena in Las Vegas. The star-studded event raised funds for Cleveland Clinic Lou Ruvo Center for Brain Health and its fight against neurodegenerative brain diseases such as Alzheimer's, Huntington's and Parkinson's diseases and multiple sclerosis. Chef Wilson, along with the Gordon Ramsay Steak team, had the pleasure of cooking for her mentor and the events 1700 guests. Chef Ramsay was present in the audience at the 2013 gala, but not only for the beef wellington. The Michelin starred chef donated his talents in a private dinner for 20 guests that auctioned at $180k. 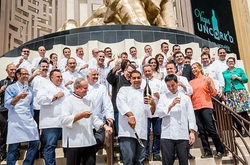 Vegas Uncork’d is a celebration of food & drink in the heart of America’s most energetic food city. This year’s festivities saw Gordon Ramsay, Joël Robuchon, and Bobby Flay cooking side-by-side for guests.
A four-day schedule of unique events where guests are able to meet the star chefs behind Vegas’ greatest restaurants, sample their signature dishes, and take away tips and tricks from the most talented culinary artisans in the world. Chef Wilson was honored to work along side Chef Ramsay representing Gordon Ramsay Steak, Gordon Ramsay Pub & Grill, and Gordon Ramsay BurGR at the 2013 Uncork'd event. 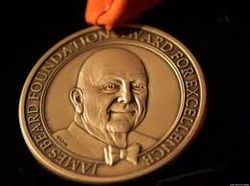